At present, little is known about the causes and the therapy. A lot of research still needs to be done. Moreover, it is very difficult to generate sufficient financial resources to make careful and fundamental research possible. In the Netherlands, the ild care foundation is the first foundation to actively represent the interests of this target group. More information can also be found elsewhere on our website.

In addition to the aforementioned lung diseases, problems can also arise due to the inhalation of air with harmful particles and / or dangerous gases. Breathing in these substances then triggers a defense or protection mechanism. Under normal circumstances, this defensive process runs smoothly and the person in question does not fall ill. In susceptible individuals, this process derails, an overly strong immune response occurs and lung abnormalities may appear. Such a reaction can also occur if someone does not tolerate certain medicines well. There may then be a problem with the degradation or metabolism (metabolism) of the drug.

The most obvious and known contact organ is our skin. All kinds of substances can penetrate the body through the skin and sometimes have an undesirable effect. However, it is not the skin but the lungs that form our largest contact organ. The surface of the skin is approximately 1½ m2. The surface of the lungs is approximately 90 m2, or the size of half a tennis court. The surface area of ​​the lungs is therefore approximately 60 times that of a human skin. The lung is, as it were, “embedded” in two environments, both of which can supply harmful substances. Firstly, there is contact with the ambient air. The function of the lungs is gas exchange: we breathe in air which contains oxygen (O2), which is absorbed and carbon dioxide (CO2) is exhaled again. This gas exchange takes place in the alveoli, where lung tissue is in close contact to the bloodstream through a thin membrane. 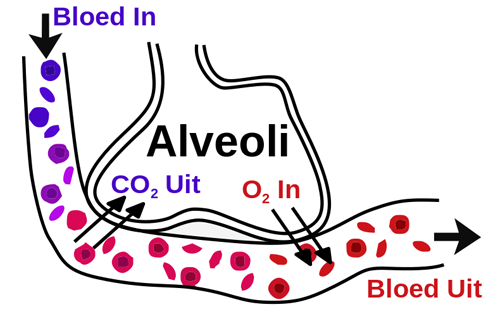 This way oxygen-poor blood that comes out of the body becomes oxygen-rich again. Contact through the lungs is less direct, but not simply preventable. The air that someone inhales can be literally breathtaking if it contains harmful particles or gases. In addition, the lung has close contact with the bloodstream. All kinds of harmful substances can reach the lung via this route and literally lead to a breathtaking condition.