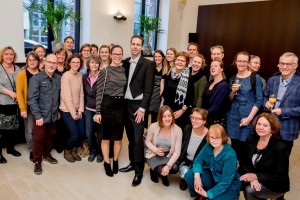 Bert Strookappe in the middle, among his colleagues

Bert Strookappe was born on November 13, 1981, in Deventer, The Netherlands. After training to become a physical therapist he worked in three consecutive hospitals. In the same year (2005) he started the Master’s degree program in physical therapy at the University of Utrecht. Since December 2007 he has been working at the Department of Physical Therapy of Gelderse Vallei Hospital, as a physical therapist, focusing on the treatment of patients in the surgical ward (vascular surgery) and Intensive Care. Clinical rehabilitation of critically ill patients (with a wide range of conditions and comorbidities) has been his main interest. He considers the management of the rehabilitation process of critically ill patients, from ‘bedridden’ to ‘walking out of the hospital’, to be the most inspiring aspect of his work. The integration of scientific evidence in daily patient care is an important part of his tasks. Since 2012 he has been involved in the management of outpatients with interstitial lung disease (ild). The research project described in this thesis started in 2014 at Gelderse Vallei Hospital, with Prof. Marjolein Drent and Prof. Jolanda De Vries as his supervisors. He is a member of the ild care foundation research team and the ILD Center of Excellence of the St. Antonius Hospital, location Nieuwegein, The Netherlands. The results of the studies so far have been presented at the annual European Respiratory Society’s (ERS) 2015 International Annual Congress in Amsterdam, as well as at the American Association of Sarcoidosis and Other Granulomatous Disorders’ (AASOG) 2015 conference in Denver, USA, and at the Foundation for Sarcoidosis Research’s (FSR) Patients 2015 Conference in New Orleans, USA. He was an invited speaker at the WASOG (World Association of Sarcoidosis and Other Granulomatous Disorders) meeting in Gdansk, Poland, June 2016. In 2015 he received the ‘Research Support 2016’ grant from the Sarcoïdose Belangenvereniging Nederland (SBN: Dutch Sarcoidosis Patients Association) to support the research-project entitled ‘Physical Training in Sarcoidosis’. He lives with his wife, Flora Strookappe-Kokenberg, and two sons, Julian and Benjamin in the Achterhoek, The Netherlands.