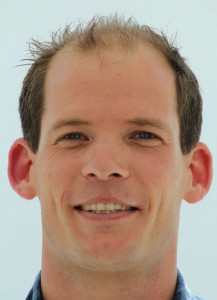 Rik (Gerardus Josef) Marcellis was born on November 30th, 1981, in Venray, the Netherlands. In 2000, he completed his secondary education at the Atheneum of the Dendron College in Horst. In the same year he started studying health sciences, specializing in movement sciences, at Maastricht University (Maastricht; the Netherlands), and in 2003 he enrolled in the physical therapy program at Hogeschool Zuyd (Heerlen; the Netherlands). He graduated in physical therapy and obtained his Masters degree in health sciences in 2006. Since May 2006 he has been working at the Department of Physical Therapy of Maastricht University Medical Centre (MUMC) as a physical therapist, focusing on the treatment of patients with neurologic disorders and cystic fibrosis. In November 2013, he became also part-time teacher at Hogeschool Zuyd (Heerlen, the Netherlands). The research project described in this thesis started in 2009 at MUMC, with Prof. Marjolein Drent and Dr. Ton Lenssen as his supervisor and co-supervisor, respectively. At the WASOG/BAL Conference in Maastricht in June 2011, he received the award from the Foundation for Sarcoidosis Research USA and the ild care foundation for Excellence in Sarcoidosis Research in the Netherlands. He lives with his girlfriend Annemarie van Wijk and daughter Fenna in Sibbe (Valkenburg, the Netherlands).